During the recent years that Democrats had new political power in the Virginia legislature, they helped expand health insurance for low-income people, lifted restrictions on abortion access, expanded anti-discrimination protections and made it easier to vote. Now, with Republicans’ wins in Tuesday’s elections up and down the ballot, the state’s legislative priorities are set to change, a shift that could have broad implications for women and LGBTQ+ people.

Republican Glenn Youngkin’s defeat of Democrat Terry McAulliffe, along with GOP gains in the state legislature, will give Youngkin, a former private equity executive, a level of legislative power that some Democrats predict could stifle abortion access, LGBTQ+ rights and voting rights. It could also have ramifications on education, a major focus of Youngkin, who campaigned both on expanding the budget and increasing teacher pay but also restricting lessons in public schools on the role of racism in American history.

Republican Winsome Sears made history Tuesday night, becoming the first woman to be elected lieutenant governor and the first woman of color to win any statewide office. Her tie-breaking power in the state Senate — where Democrats have a slim majority and no seats were up for election this year — could prove pivotal for conservative policymaking. During her campaign, Sears expressed opposition to abortion, as did Youngkin, and support for a Texas law that effectively banned the procedure after six weeks of pregnancy.

Jamie Lockhart, executive director of Planned Parenthood Advocates of Virginia, said she expects newly emboldened Virginia Republicans to introduce anti-abortion legislation. She said the focus will be on blocking them in the Senate. Lockhart emphasized the election results should not deter people from seeking abortion services in Virginia.

“Today I’m thinking of patients and what this shift means for them and also means for the medical providers that are providing compassionate health care,” she told The 19th.

During her victory speech, Sears did not discuss abortion. She said she would focus on “the business of the commonwealth,” including funding historically Black colleges and universities, cutting taxes, making neighborhoods safer and ensuring children get a “good education.” 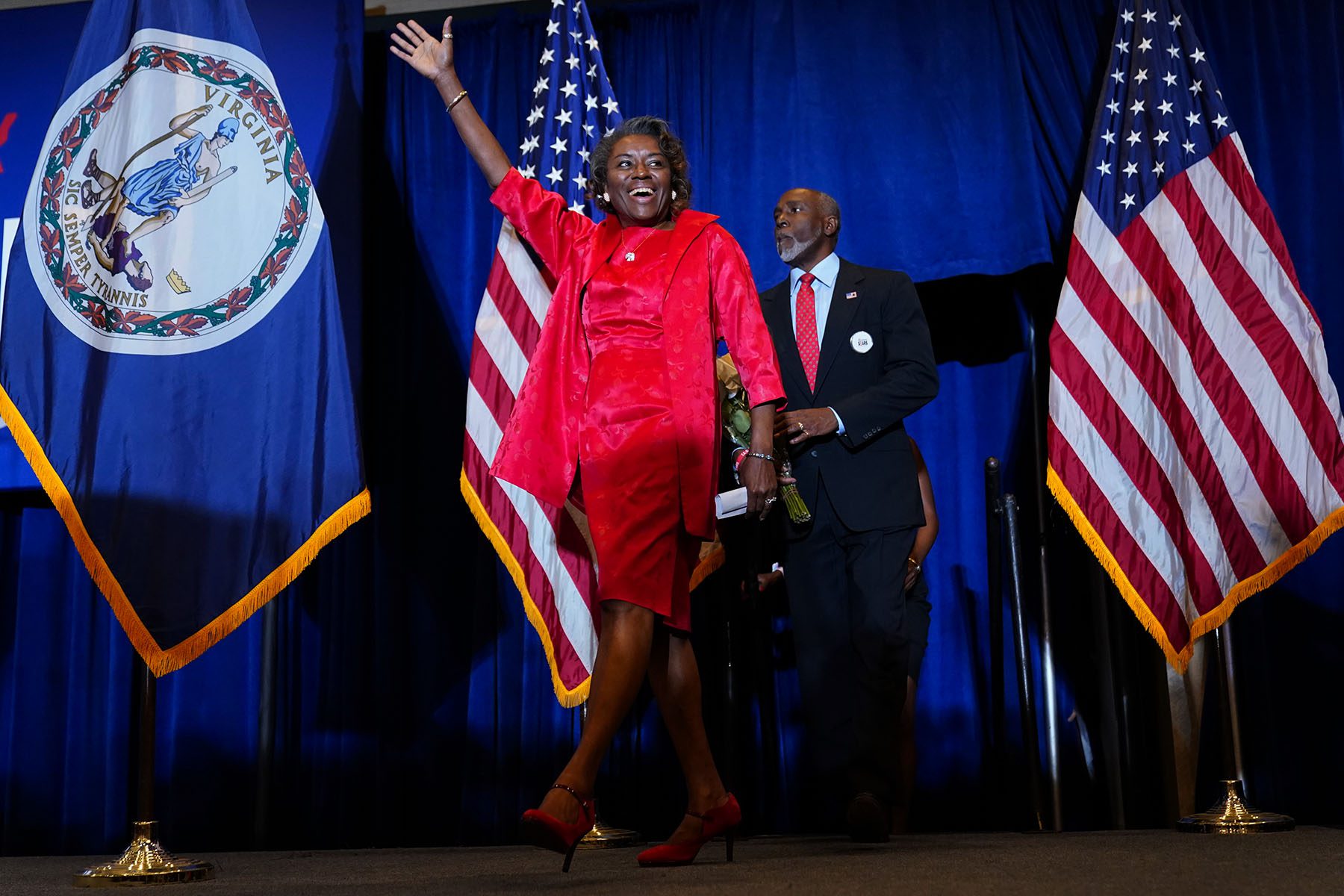 “At this point, we have to just be on defense with those issues,” said Del. Danica Roem, who was the first out transgender person to be elected and serve in a state legislature and who won a third term Tuesday.

More broadly, Republicans rejoiced at their political fortunes, which extended beyond the state. Their candidate in the New Jersey governor’s race closely trailed the Democratic incumbent, and the party won big in statewide judicial races in Pennsylvania.

“This is what can happen when state Republicans run races with the right candidates, the right messages, and data-driven tactics,” the Republican State Leadership Committee shared on social media.

Christina Polizzi, national press secretary for the Democratic Legislative Campaign Committee, said the party expected an “uncertain political environment” in the leadup to Tuesday. But she noted that Democratic incumbents in several competitive districts in Virginia suburbs also kept their seats.

“The reality is, in those districts, our incumbents in the legislature held on because of their accomplishments, not in spite of them,” she said.

Democrats’ trifecta of government control during the 2021 legislative session in Virginia meant it did not advance bills that popped up in Republican-controlled legislatures around the country. That legislation included a record number of abortion restrictions, anti-trans proposals and voting restrictions.

During the campaign, Youngkin expressed opposition to marriage equality, alarming advocates. Youngkin told the Associated Press that he feels “called to love everyone” but when asked if he supports same-sex marriage, said, “No.” Youngkin said he would support the law, which he described as “legally acceptable.”

On a conference call with members of the press, Roem, a Democrat, predicted Republicans will file “a lot of bad bills” that they may not intend to pass but want Democrats to vote on to create a voting record for future elections.

Roem said she plans to file a series of bills aimed at addressing flaws in Virginia’s adult guardianship system and hopes to work with Republican colleagues.

“We are at least at a place where I think that House Republicans, along with the governor, are going to have to understand that they have to work with a Democratic-held state Senate,” Roem said. “… In that case, if they want to get stuff passed, as opposed to just making headlines, what it means is that they’re going to have to come together in a way on, ‘OK, what bills can we deal with that are not inherently partisan?”

Much of Youngkin’s closing argument was based on the role of public schools. In addition to promising to increase teacher pay and schools’ budgets, he said parents should have more say in the curriculum and also greater access to charter schools. Much of the discussion of curriculum, in Virginia as in races around the country, was tied to accusations that students were being taught “critical race theory,” an advanced academic framework and critics have broadly applied to lessons that teach about racism’s role in U.S. history. The argument is seen as designed to appeal to White parents, with activists showing up at school board meetings to argue that their children are being taught that their race makes them bad.

“Friends, we’re going to embrace our parents, not ignore them.” Youngkin said in his victory speech. “We’re going to press forward with a curriculum that includes listening to parents’ input, a curriculum that allows our children to run as fast as they can, teaching them how to think, enabling their dreams to soar. Friends, we are going to reestablish excellence in our schools.”

While McAuliffe highlighted plans to expand paid sick leave and a $15 minimum wage, a bulk of his focus was also on trying to tie Youngkin to former President Donald Trump, who lost the state by 10 points in 2020.

Instead, preliminary exit polling shows Youngkin — who expressed support for the former president but did not wholeheartedly embrace him — had the more effective message.

“The big thing I’ve been seeing across all the focus groups is the Trump voters were filled with rabid enthusiasm about going out to vote for any living breathing Republican,” she said.

“It looks to me like the enthusiasm gap isn’t that Democrats didn’t turn out, it’s that Republicans turned out, and over-performed in these rural districts — there’s pent-up enthusiasm for Republicans that’s almost overwhelming.” 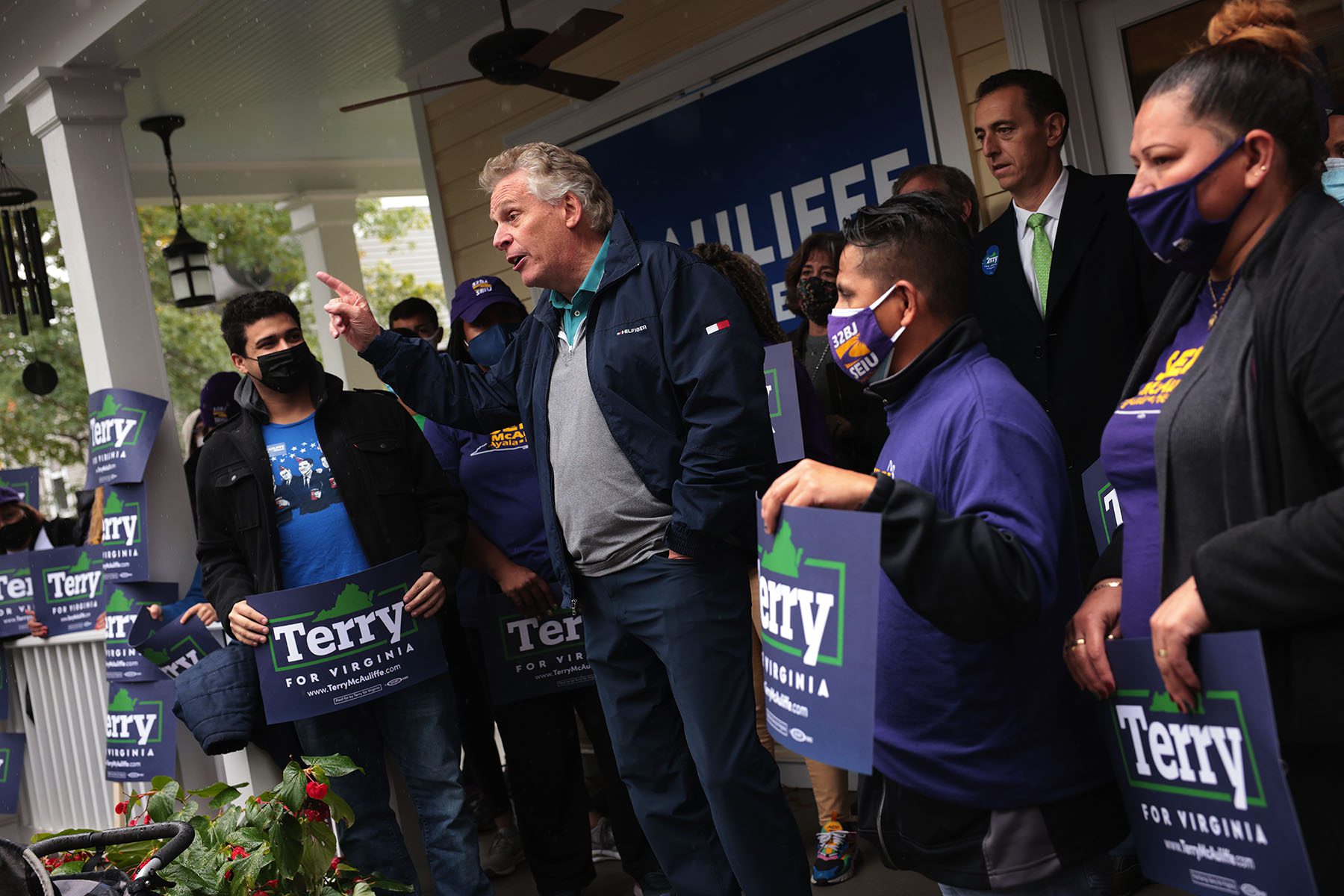 As Democrats survey what Virginia means ahead of the midterm elections, some are thinking that McAuliffe’s loss shows the need for diverse faces in politics. A’shanti Gholar, president of Emerge, a candidate recruitment organization for Democratic women, said on the same conference call with Roem that some Democratic candidates across Virginia outperformed the former governor.

“Virginia should serve as a warning to Democrats that if we remain complacent and don’t put in the work to run candidates who speak to the most pressing issues facing this country, 2022 will be a rough year at every level of office,” she said.

Johnson said while she’ll always support Democrats who win their party’s nomination, “But until then? It’s time for new leadership. Especially as the GOP’s racist and sexist culture wars are working for their base.”

Johnson added that Democrats are tired of fighting against Trump’s legacy and should instead focus on inspiring candidates or popular policies such as paid family leave, which House Republicans today said would be back in Biden’s Build Back Better plan, though its ultimate fate is unclear. Voting rights legislation has also stalled amid Republican opposition.