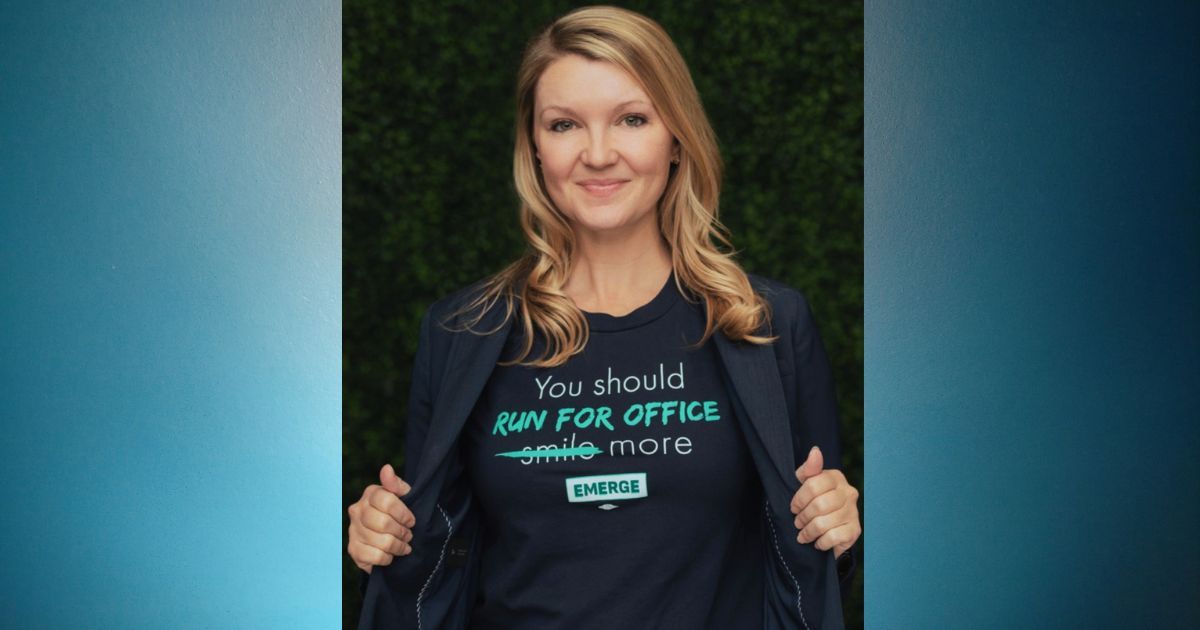 Baker swooped across the state this summer, logging 1,000 miles to drum up new recruits and spread her message: If you’re a Democratic woman with your eye on public office, there’s a team in place ready to help you win.

A single mom of two, Baker used to spend her free time helping women run for office. She took the helm of Emerge in December 2021 so she can do it full time.

What is Emerge Arkansas?

Emerge is an organization that recruits, trains and supports Democratic women running for office at all levels. Emerge is a national organization with chapters in over 20 states. Our candidates get the support of a national team of trainers, communications professionals and consultants. And since I’m here, you also get that person who’s working on the ground in Arkansas.

Tell us about your road trip.

We started out in Fort Smith, then went to Texarkana, El Dorado, Lake Village, Pine Bluff, Helena and Jonesboro, then ended with a celebration in Little Rock. In some cities we had four people show up, in some we had 30. In each city we had really meaningful conversations about recruiting, about government, about difficulties of running a campaign, especially in smaller rural areas. In every city there was enthusiasm and energy and excitement that these resources exist.

What kind of resources are you talking about?

We’ve already completed training for this year. In election years we do bootcamp training, which is an attenuated version of the longer trainings we do in other years but covers the same topics. Class size is limited to make sure everyone gets enough focus and attention. We had 24 applicants. I was told I could take seven, but finally got up to 11. The virtual training is 30 hours over one week.

What we try to deliver to them first and foremost is the understanding of the nuts and bolts of how to run a campaign: how to craft your story, how to create a story of self, how to create a budget, how to fundraise for that budget. Secondly, candidates get these connections to expert trainers. The third and most important thing, what I love most about our training, is that it creates a network of women we can rely on for practical help or encouragement.

Applications for the 2023 Signature training program open on our website on Women’s Equality Day, Aug, 26.

How do you pay for all this?

We rely on donations from our supporters. Part of my job as executive director is to fundraise. For folks who share our mission, I offer the opportunity to invest in that mission.

Being a Democrat and a woman in Arkansas feels pretty tough right now. How do you keep your chin up?

I think there are people in power who are trying to limit the rights of everyone else. But I see women who have power in their communities, who are respected in their communities. We are seeing trends of Democratic women doing better. I have to keep hopeful. We have two choices in the face of this unprecedented time. We can give up, or we can keep going. I don’t think giving up is a viable option in Arkansas right now. Every woman I met is energized and ready to do this work. They’re not going to stop. People who believe in common sense and decency will be the majority eventually. The best way I can see to achieve that is to recruit women, encourage them to run and give them the best tools possible to run their campaigns.

What are the issues energizing Arkansas women right now?

Obviously the overturning of Roe has been extremely energizing. When we ask people what’s important to them, we’re hearing reproductive rights, contraception, marriage equality. People are fired up! I think people underestimated what SCOTUS would do and are feeling let down. We need to focus on the local again because now this is a battle at the state level. The other thing I’m hearing about is climate. We’re seeing fires, we’re seeing droughts, we’re seeing mudslides. People can look at that information and feel overwhelmed, or they can decide to take action.

Would we be better off with more women in office?

And data tells us that women tend to be better representatives. When they’re elected, there tends to be more transparency, more communication, they literally bring home more dollars to their home districts. They are more collaborative, they introduce more legislation and get more legislation passed.