How structural barriers leave aspiring women, lawmakers of color at a disadvantage 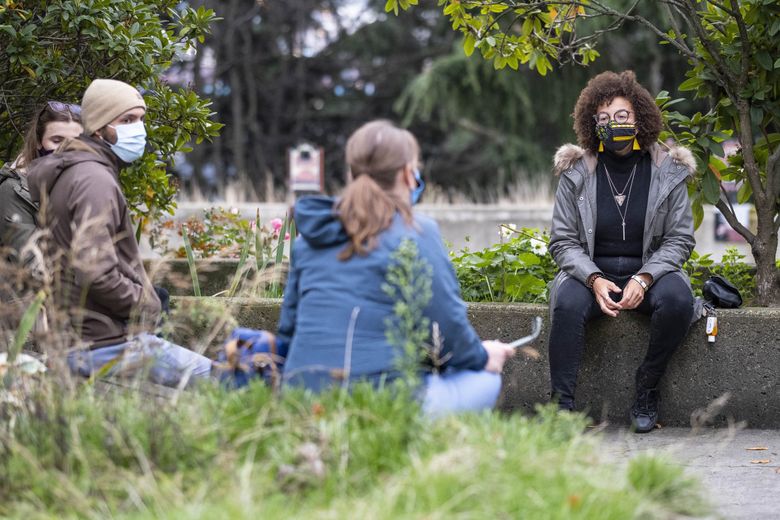 Kirsten Harris Talley meets with Harborview staff on a listening tour in her 2020 campaign for state representative. (Dean Rutz / The Seattle Times)

The United States likes to say it’s a beacon of democracy for the rest of the world, but the truth is, our democracy has never represented us all equally.

The U.S. ties with the Dominican Republic for a dismal 72nd place in the representation of women in national government, according to IPU Parline, based in Switzerland, which collects the worldwide data.

Unlike countries like India, Iceland and Sri Lanka — which elected a woman prime minister in 1960 — the U.S. has never elected a woman head of state. On the judicial side, out of 115 Supreme Court justices up to now, only five have been women. The first Black woman to ascend to our highest court, Ketanji Brown Jackson, was only confirmed last week.

Washington state has made strides achieving greater representation in the state Legislature, but the percentage of women in our governing body is still just 42%, despite being half of the population.

This is not a surprise to Rep. Kirsten Harris-Talley, D-Seattle, who recently announced she would not run for reelection. A Black queer woman, Harris-Talley said political bodies like the Washington Legislature were not set up for women and people of color to serve. The Legislature was entirely male until 1913 and almost entirely white. At its founding in 1889, the largest occupation for legislators was farmer, followed by lawyer. Harris-Talley said that history shapes the present.

“The reason we are a quote unquote, ‘part time’ Legislature,” Harris-Talley said, “is so that you could take your horse and buggy and take the time it took to travel from Spokane to get to Olympia to serve your term and get back in time for harvest.”

This is also not a surprise. “The reason our Legislature is mostly doctors, or mostly people who have wealthy partners, is because it is not an affordable or sustainable job,” Harris-Talley said.

In Washington, legislators make $56,881 for what is supposed to be part-time work. But in reality, it doesn’t work out that way.

According to the National Conference of State Legislatures, in Washington state, “part-time” legislators really work an average of 74% of their time. Harris-Talley said that percentage varies a lot between legislators — and can be a lot higher. But in this scenario if 74% earned a lawmaker $56,881, a full-time salary at that rate would be $76,866.

Harris-Talley is in a rare position of comparing the structure of the Legislature to another elected body, the Seattle City Council. She was appointed to the council to fill a vacancy in 2017 and served for 51 days. She said the differences were stark.

Within 10 days of starting at the council, she said, she had a staff of five. In the Legislature, she has one legislative assistant who handles –— among a multitude of responsibilities — an average of 500 to 1,000 emails a day. The pay on the City Council was also significantly higher. Today, a council member makes $137,432 a year. It’s a full-time job and that means you not only can dedicate your time to the work, but you don’t have to worry about finding another job that allows you the flexibility to be a “part-time legislator who is actually full time,” Harris-Talley said.

These structural differences affect who has the resources to serve.

Emily Carmichael is the executive director of Emerge Washington, which trains Democratic women to run for office. She said the organization is building a network and support system for women and nonbinary people to find the “right race at the right time” so they can represent their communities.

“All of our systems are white male dominated systems,” Carmichael said. “They were not meant for women. They were not meant for people from marginalized backgrounds, for people of color, for women of color.” When women and people of color get elected, there’s not as much support for them in place. She said Washington is not alone in this. “A lot of states have part-time legislatures that have a stipend basically. The salary that they pay is not really going to support a family. It is an issue.”

Carmichael said there is no quick fix, but getting more women and people from marginalized backgrounds elected will help change the systems. It’ll just take time.

In the meantime, a Legislature that does not represent the lived experiences and challenges of all of us will continue to make policies that only benefit the few or the most powerful.

“I really sit at the intersection of what the difference between equality and equity is,” Harris-Talley said. “ … If we give the same things to everyone, the same outcomes are going to happen instead of structurally addressing policies that create the circumstances for those who’ve been strategically and intentionally disadvantaged to succeed. We’re going to keep chasing our tails, we’re not going to catch up.”