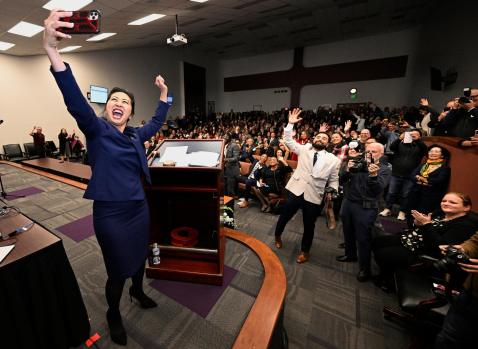 Helen Tran cheers and takes a selfie as she is sworn in as the new Mayor of San Bernardino during a special ceremony before the city council meeting at Feldheym Library in San Bernardino on Wednesday, Dec. 21, 2022. (Photo by Terry Pierson, The Press-Enterprise/SCNG)

Toward the end of a 10-day trip to her parents’ native Vietnam shortly after an overwhelming number of San Bernardino voters elected her as mayor, Helen Tran got her first taste of celebrity.

“We know who you are,” Tran recalled the receptionists at the Da Nang hotel tell her the final day of their stay.

“Can we take a picture with you?”

Blown away by the request, the daughter of Vietnamese refugees and first Asian American mayor of San Bernardino obliged.

“I didn’t realize I became global news,” Tran, overseas last month to learn more of her family history, said in a phone interview this week.

Indeed Tran’s historic victory over Jim Penman in the Nov. 8 election made national and international headlines.

EMILY’s List, the nation’s largest resource for women in politics, celebrated her win, as did Emerge, an organization that recruits and trains Democratic women to run for office.

Additionally, the news was “blasted in Vietnam media,” Tran said.

“My journey to run for office, I didn’t run for fame or to be the first Asian American mayor,” she added. “I saw a community in great need of effective leadership, that needs a leader who can really make sure everyone’s included, looked out for, taken care of.

“Someone who can gather all the resources available and be an effective, responsible public servant,” Tran added.

“And I have that public servant heart.”

Tran was sworn in as San Bernardino mayor Wednesday, Dec. 21, marking only the third time in 168 years a female has held the top elected office in town.

San Bernardino now boasts one of the most diverse group of representatives in the region.

Three members on the City Council are Latino. One is White and two are Black. Councilmember Ben Reynoso is biracial, Latino and Black.

And at 40, Tran is one of, if not the youngest person to serve as mayor.

“I can’t do this alone,” she said. “An effective mayor requires a team.”

Tran knows what leaders look like, she said, because she grew up in a house with two of them.

For a class her senior year at UC Santa Cruz, Tran wrote an oral history on her father’s vuot bien, or escape, from communist Vietnam. Hours of interviews answered lingering questions Tran had of her parents’ journey from war-torn Vietnam to San Diego in 1981 and San Bernardino a few years later.

Across 41 pages of narrative and transcription, Tran chronicled her father’s decision to flee, his painful split from his wife while on the journey, his capture, torture and eventual escape and reunion with his better half.

My father is probably the most astounding and courageous man I have the pleasure to know, Tran, who shared the paper with this news organization, concluded in the epilogue, and I am truly honored that he struggled so hard to keep his family alive.

“That’s why I’m not afraid of any issues I face,” Tran said. “Nothing is near my parents risking their lives to be here.”

Born in San Diego in 1982, Tran was 6 when her parents moved their family to San Bernardino at the behest of a neighbor who wanted them anywhere but the part of San Diego they made home.

In San Bernardino, Tran recalled her parents having as many as five sewing machines in the kitchen, sewing a skill Tran said she picked up by second grade.

Selling clothes, she added, is how the family earned a living.

Tran, who learned English while in elementary school, graduated from Cajon High School and then UC Santa Cruz, the first person in her family to graduate from college.

She began working as a San Bernardino staffer in 2006, and a decade later became the youngest human resources director in city history.

“I’m blown away with how far I’ve gotten in life,” said Tran, one of hundreds of City Hall employees to witness the city navigate an unprecedented bankruptcy between 2012 and 2017. “Becoming a director, now mayor, my parents are just so proud. Maybe I have it in me to do whatever I can to make sure things are right, to make sure things get done.

In a phone interview, Morris, who was mayor when Tran began working at City Hall, said Tran had long ago “set out public service as the destiny for her career.

“Helen’s highly intelligent,” he added. “Secondly, her tendency is always to listen first before she speaks. She handled a lot of difficult issues as a department head, and she did it with patience, respect, cooperation.

“When she came before the council or me as mayor,” Morris said, “she always had her ducks in a row. She was organized. Her notes were remarkably cogent and understandable. Everything about her spoke professional, courtesy, kindness.

“Those are things you hope for in a chief executive officer.”

Tran finished first in the June primary among seven candidates and secured the mayor’s seat last month with 63% of the vote.

David Friedman, who co-owns the popular Viva La Boba with girlfriend Tansu Philip, recalled this week Tran visiting he and other downtown business owners at the outset of her campaign to understand their needs and issues.

“Usually that’s the end of it,” Friedman said, “but she’s continued to reach out to us. If I ask for her time, she shows up.”

Friedman fully expects Tran to unite the City Council and complete “a lot of historic firsts for the city.”

“I’m excited to see what she will do for us,” he said.

Among the scores to personally congratulate her on her landmark victory last month was Evan Wessel, associate director of intergovernmental affairs at the White House, Tran recounted.

Anything the city needs, she said Wessel told her, contact us.

“There’s been such an outpour of positive response and support,” Tran said. “I am honored to lead this city and work extremely hard to see through all the issues and solve all the problems that exist.

“It will not happen overnight,” she continued, “but at least I can start it.”

While Tran is entering her first year in elected office, city government is anything but a foreign concept.

Tran served as human resources director in San Bernardino until taking the same position in West Covina three years ago.

Her final duty in West Covina before resigning to take the reins in her hometown was attending Tuesday’s City Council meeting.

Returning to San Bernardino to serve as mayor, Tran said, “is coming back home.”

And the mother of three returns with a message:

“If you’re willing and committed, I want all hands on deck,” she said. “I can’t do this alone. I know and recognize that. I know there’s a lot of work, but I’m not afraid of a lot of work.

“I thrive off challenges.”