Danica Roem was first elected in 2017 and serves in the Virginia House of Delegates. She came to Portland on Thursday to encourage others to run for office. 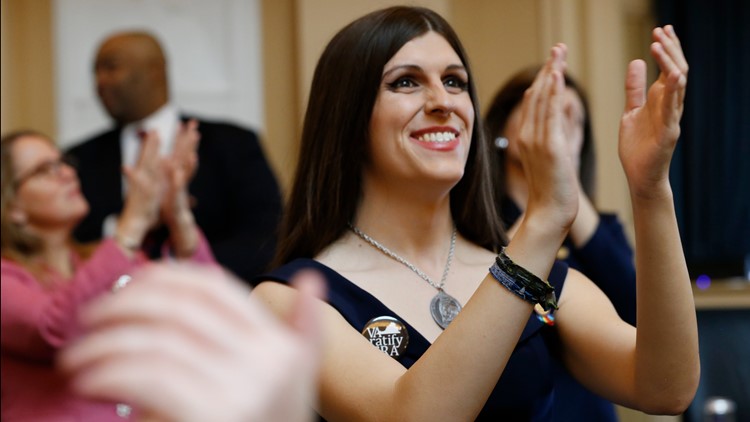 Danica Roem, the first elected and seated openly transgender state lawmaker in the U.S., spoke in Portland on Thursday, encouraging others to run for public office.

In 2017, she unseated an incumbent in the Virginia House of Delegates and was re-elected in 2019 and 2021. Roem, a Democrat, represents Virginia’s 13th House of Delegates District, which includes Manassas Park and western Prince William County. She is also the author of “Burn the Page.”

Roem spoke on behalf of Emerge Maine, an organization that helps train women to run for office.

Ashley McCurry is the executive director of Emerge Maine and spoke for a couple of minutes before Roem took the microphone.

During that time, McCurry revealed, on average, people need to be asked seven times to run for office before they will. And that typically takes around two years.

When Roem took the microphone, the lawmaker talked about how she got into politics. She was actually a reporter from 2006 to 2016. And she ended up being elected to represent an area she covered extensively during her career, writing more than 2,500 news stories.

When she ran for office, Roem said the biggest insult she faced from opponents in 2017 was being called “it” or “mentally ill.”

“They’d say that over and over,” the lawmaker said.

She discussed how those insults went beyond politics and filtered down into the day-to-day experience of LGBTQ+ individuals.

And when Roem faced attacks like that, the former reporter told her Portland audience she fundraised on them.

“When they go low, we raise money,” she said.

One particularly hateful message, Roem said, came from a supporter of conversion therapy. They sent an email telling Roem that she was transgender because her father took his life, and she didn’t have enough masculine influence around afterwards.

Eventually, Roem won, not just her primary, but the general election as well. And, since then, the lawmaker said the Virginia General Assembly has passed 32 of her bills over five years with bipartisan support. Those pieces of legislation touch on everything from LGTBQ+ quality to infrastructure to helping amputees.

The lawmaker said she doesn’t just focus on LGBTQ+ issues.

“I’m trans, and I can talk to you all day about water infrastructure,” Roem said.

But the lawmaker told her audience how important LGBTQ+ representation can be. When she first ran in 2017, Roem gave a number of interviews to news organizations. She said a mother in Roanoke read one of the interviews and shared it with her trans daughter who has autism.

Roem said the daughter had attempted suicide. But when she read the interview about Roem’s candidacy, the child told her mother, “She’s just like me.”

“When we run, we give hope to people we don’t even know,” Roem said.

Speaking on Maine’s efforts to legalize same-sex marriage, the lawmaker noted proponents weren’t successful by making lofty arguments. She said same-sex marriage was legalized in Maine because supporters started putting faces to the movement and showing voters that same-sex couples were just regular people in their communities who wanted equal rights.

Roem is now running for the Senate of Virginia. In addition to that, she’s helping train 19 future political hopefuls.

When speaking to other political hopefuls in the room, the lawmaker didn’t promise a simple path.

But she wants to help others flip the script.

When it comes to transgender representation in Maine state offices, Roem said she wants voters to know trans individuals are already in communities across the state. And they have public policy ideas that are focused on quality of life issues, from feeding hungry kids to transportation.

Nationwide, more transgender and nonbinary candidates are winning elections. Roem said one remarkable thing is these candidates aren’t just winning in blue metro districts but in rural and suburban areas. Zooey Zephyr of Montana is one example, but there are more.

Serving in public office has its challenges. Roem told NEWS CENTER Maine that, for her, making time for family is hard.

The lawmaker became engaged in September, but she balances different roles in the House of Delegates, as executive director Emerge Virginia, and writing.

“It’s hard,” she said. “The work you do makes life better for other families.”

Roem added that crafting policies to make sure people have health insurance or enough money to put food on the table is important to her.

The lawmaker said she wants to leave things better for the next generation.