‘A shining example of what is possible’: Andrea Campbell becomes first Black woman to be Mass. attorney general 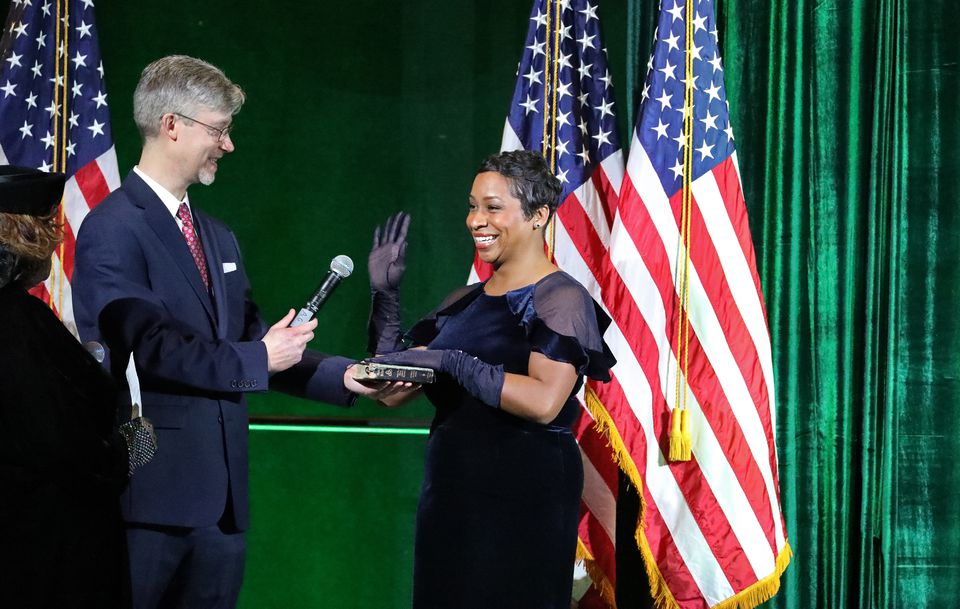 Andrea Campbell was sworn in as attorney general Wednesday afternoon, making history as the first Black woman to serve as the state’s top lawyer and first woman of color to hold statewide office. She joins a historic group of constitutional officers where five of the six officials are women.

Campbell took her oath of office at the Boston Convention and Exhibition Center in front of a background of emerald green — an apparent reference to her campaign colors. She then spoke to a crowd of more than 1,000, including office staff, supporters, elected officials, community leaders, and her family, including her young sons who excitedly cried out when their mother took the stage.

“Today I stand on the shoulders of beautiful and resilient Black people who stood up for civil rights for freedom, inclusion, love,” Campbell said, referencing former US Senator Edward William Brooke, the first Black senator elected to serve in Washington, D.C., and the first Black attorney general of Massachusetts. “My hope is that every day, women and young people who look like me — and see the incredible work of this office — will feel less invisible, despairing, and lonely because there continues to be a shining example of what is possible.”

Governor Maura Healey, who sat in the front row, wiped a tear after Campbell’s speech. 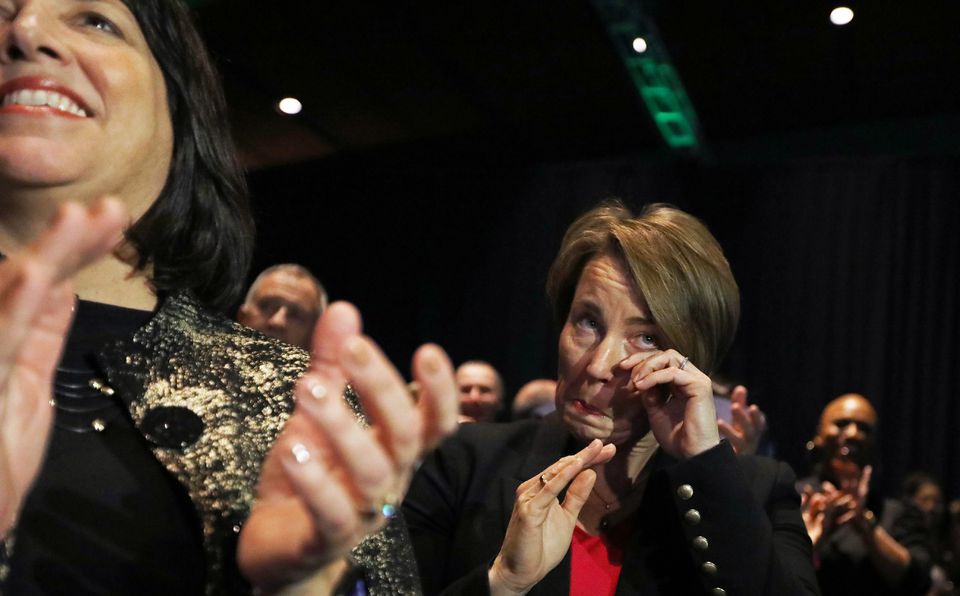 Governor Maura Healey wiped away a tear after Andrea Campbell’s swearing in as the state’s 45th attorney general.PAT GREENHOUSE/GLOBE STAFF

The mood was joyous Wednesday, with dignitaries, local business leaders, and others packing the hall, some with young children in tow to witness the historic day. A duo of musicians performed Campbell’s favorite gospel song, “How I Got Over,” to loud claps from the audience. Students from the Codman Academy Charter Public School in Dorchester performed the Pledge of Allegiance, and a vocalist performed a passionate rendition of the National Anthem, accompanied by a cello. Campbell’s uncle, Ronald Savage, closed out the event with a drum solo performed using a metal jazz drum brush.

“No person is more motivated to tackle for all than a woman with such personal and painful experience with fairness and justice,” she said. “Know that Andrea Joy Campbell is here because of you, in every sense of the word.”

Campbell, a Roxbury-born education lawyer and former president of the Boston City Council, campaigned on promises to reform the state’s criminal justice system, close the wealth gap, and bring more equity to areas such as school funding.

In her address Wednesday, she spoke to residents in every region of the state, reiterating actions she has promised to take on during her first days in office, including protecting the state’s elders, creating a gun safety enforcement office, and expanding the right to access abortions and reproductive care.

Campbell grew up in public housing and without parents for the first eight years of her life after her mother died in a car crash on her way to visit her father in jail. Her two brothers cycled through the criminal justice system, and her twin brother, Andre, died at 29 of an autoimmune disease while in state custody as a pre-trial detainee.

“I like to think of it as an impossible story made possible by the power and grace of God,” she said in her inaugural address. “That a girl from a family who grew up in public housing in Roxbury in Boston could become the 45th attorney general of Massachusetts.”

Campbell graduated from Boston Latin School, and went on to attend Princeton University and UCLA Law School. After several years in private practice, Campbell served as legal counsel to former governor Deval Patrick. She was elected to the Boston City Council in 2015, and in 2018 she was elected City Council president — the first Black woman to hold the title.

An excerpt from Amanda Gorman’s “The Hill We Climb,” first read at President Biden’s inauguration in 2021, was printed on the inside of the pamphlet for Wednesday’s event.

As of Wednesday afternoon, a committee created to fund the event had reported more than $117,000 in donations.

At one table, 8-year-old Zora Myers was focused on her “Black mermaids” coloring book while her mother, Manikka Bowman, watched on.

Bowman met Campbell at Emerge Massachusetts, a nonprofit that encourages Democratic women to run for office. At the time, she was running for Cambridge School Committee, and Campbell was running for Boston City Council. The two bonded over having young children, and Bowman said it was important to bring her daughter to witness the historic day.

“I’m just elated to see [Campbell] walk into her full potential,” said Bowman, cofounder of Cambridge-based developer HarveyReed. “It’s probably not fully realized yet. I think the best is yet to come.”

Secretary of State William F. Galvin also took the oath of office Wednesday morning alongside his wife, Eileen, in a private ceremony inside the governor’s ceremonial office. In doing so, he set the record as the longest-serving secretary in Massachusetts history, a point Galvin, 72, later shrugged off when asked if it brought any added meaning to the start of his eighth four-year term.

“Not really,” the Brighton Democrat said.

Down the hall an hour later, state Treasurer Deborah Goldberg was sworn in for her third term in a crowded Senate chamber, where she was feted by legislative leaders and Healey.

Healey called Goldberg, 68, a “mentor,” a steady fiscal manager for Massachusetts, and someone who is “great to have at a party,” drawing laughter from the crowd. Senate President Karen E. Spilka praised Goldberg for leading the state’s Lottery, calling it “the most successful in the nation.” (By one count, Massachusetts residents spend more on lottery and scratch-off tickets than those in any other state.)

Matt Stout of the Globe staff contributed to this report.