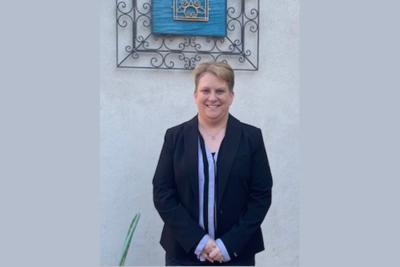 Allie Bones is pictured at Tres Leches Cafe near the State Capitol on Tuesday, Dec. 20. Courtesy of Jewish News

Allie Bones, the Jewish woman who is about to step into Arizona’s second most powerful job as the governor’s chief of staff, never thought that she would have to concern herself with the Arizona-Mexico border, school vouchers or the dangerously low level of the Colorado River — at least not as anything but a citizen of the state.

But on Jan. 5, when Gov.-elect Katie Hobbs is sworn in and officially takes the reins from outgoing Gov. Doug Ducey, those are the types of things that will fill her days, and often her nights and weekends.

As Hobbs’ right hand, Bones will manage and oversee policy development, coordinate with state agencies and work closely with the governor on accomplishing her agenda.

Arizona’s water concerns will be just one of several priorities, given that Hobbs “has made it very clear that she does not intend to continue to kick this can down the road — it’s been kicked as far as it can be and we need to address it,” Bones told Jewish News.

“We’ll be bringing all the players together to try to tackle this from a holistic perspective and a statewide perspective,” she said, surmising that Hobbs’ collaborative leadership style could be the thing to bring people together and find solutions.

Bones respects that style of leadership, especially as it’s one she shares, something she developed over her long career in social work. That’s where she started — a far cry from where she is now.

Bones’ first boots-on-the-ground job in social work was assisting victims of gender-based violence, which became her specialty. It wasn’t an issue she sought out, however; it was one that found her.

In her second year of a master’s program in social work at Arizona State University, she interned at the Arizona Coalition Against Domestic Violence (it would later change its name to Arizona Coalition to End Sexual & Domestic Violence or AzCADV) and discovered a subject that had “clear-cut answers as to how to actually address the problem” but no political will to do it.

The issue also encapsulated many of the reasons she wanted to be a social worker: women’s and children’s wellbeing, their economic safety and security; the impact of gun violence on the community; poverty and health care.

“It’s all interwoven, interconnected and it just became my life’s work,” she said.

It’s also how she met Hobbs. Bones worked as the Coalition’s lobbyist while Hobbs was the director of government relations for Sojourner Center, Arizona’s largest domestic violence shelter.

“We really learned the legislature together starting in the 2001 session, advocating for more funding for domestic violence programs,” Bones said. Later, they were also part of Emerge, a program that recruits and trains Democratic women to run for political office.

The two developed a friendship and stayed in touch. But their career paths diverged.

Bones became AzCADV’s CEO. She was happy and assumed she would stay for the rest of her career.

Then she received a call from Hobbs, who had gone from minority leader of the state Senate to Secretary of State. Would she like to become the assistant secretary?

The last few years at the helm of AzCADV, Bones thought a lot about how crucial voting, finding good candidates and democracy are to ending gender-based violence because those are foundational to build the political will “to actually do the things that need to be done.”

Equally important was convincing people who worked on issues like gender-based violence and the survivors themselves to see participation in democracy as necessary.

A job at the Secretary of State’s office was a great opportunity to expand those ideas to the state writ large.

“Getting more people engaged in and participating in our democracy, I felt, would have a ripple effect,” she said.

She didn’t know yet just how fragile democracy could seem.

Then came 2020, and two things shook up elections across the country, and her office, in particular.

The first was the COVID-19 pandemic that panicked a large number of people to request a mail-in ballot rather than risk infection by going to the polls. Helpfully, Arizonans were used to mail-in voting already, but when some politicians began questioning the validity of the process, it created a lot of headaches for Bones and her colleagues.

“Our key words were preparation and partnership, and we felt like we had done everything that we could to prepare. The counties had all the supplies they needed to deal with voters who wanted to vote in person in the middle of the pandemic, all the security measures in place and all of the preparation — we felt really ready in the days leading up to the election,” Bones said.

The second shoe dropped after the November election. Arizona was called early for Joe Biden, much earlier than anyone had anticipated, and media interest was intense. Hobbs’ calendar was packed with media interviews — local and national — from 5 a.m. to 10 p.m. some days. The race came down to four states, including Arizona, that everybody in the country was watching.

“There was a lot of anxiety but I don’t think that any of us could have imagined “SharpieGate” or anything that came about because of it,” Bones said.

Lawsuits and election denialism followed and the month after the election felt like a decade, she said.

In 2021, her office focused early on issues that would likely come up during the 2022 election, such as the best ways to address misinformation and disinformation. They learned to “pre-bunk” or anticipate misinformation and election conspiracy theories to inoculate against them before they snowballed.

One priority was enlisting the media in explaining the election process to the public. Maricopa County election officials held weekly press conferences leading up to Election Day and Bones’ office used social media and other outlets to help people understand the time it takes to get results and why not all votes are counted by the end of Election Day.

While media outlets were helpful in disseminating election information, some elected officials and candidates amplified the notion that if results took too long it was evidence that “the fix is in.”

Still, most media pushed back on those claims and explained that mail-in ballots are secure and would be counted in a timely manner, Bones said.

Though the races were close, November’s results seemed to repudiate many election-denier candidates across the nation, including in Arizona. Hobbs’ Republican opponent, Kari Lake, was “kind of the poster child whose loss was a big one for the election-denier community,” Bones said.

“A loud message was sent that voters are ready to move on and to focus on the problems that are facing the state — as opposed to continuing to rehash an election that happened over two years ago.”

Still, given the makeup of the state legislature, election denialism is not dead in Arizona. Additionally, two counts of Lake’s election lawsuit, alleging misconduct with ballot printers and chain of custody, went to trial on Dec. 21.

To critics who accused her office of vindictively disenfranchising voters, Bones countered that there should be a conversation about “what it actually means to disenfranchise people — telling your voters that that it’s not safe to vote early, causing them to go and stand in long lines and telling them that it wasn’t safe to put their ballot in a certain box was disenfranchising to voters.”

Following the 2020 election, there were “count the votes” protests outside the Maricopa County Tabulation Center that were scary and the staff “definitely felt intimidated,” Bones said. She has heard some “really nasty things” this time around about how she belongs in jail, how she’ll look good in orange and should be in Gitmo, but the worst of it has been directed solely at Hobbs.

But after surviving all that 2020 threw at her and others, nasty comments aren’t enough to keep Bones from vocally defending elections officials’ work and integrity on Twitter.

On Nov. 10, she tweeted: “Beyond tired of the disrespect from certain people towards those working 18-hour days to follow laws/procedures that exist to ensure the integrity of our vote. These people are heroes and deserving of our gratitude and appreciation for their service. #accurateresultstaketime”

(Bones also tweets her passionate love of sports, specifically, the Arizona Wildcats, the Phoenix Suns and the Arizona Cardinals. And as a native of Cincinnati, she remains a faithful Bengals’ fan.)

Both Hobbs and Ducey said they wanted a smooth transition of power, but there are definitely changes on the horizon.

Ducey liked to say he ran the government at the speed of business; his administration was centered on business needs.

“That’s not necessarily a government model that’s going to work for the Hobbs’ administration,” which will develop different methods of measuring progress and success, she said.

With their social work background, Hobbs and Bones will focus on collaboration with the legislature, agencies and the community to find solutions, Bones said.

“We plan to engage with the community and come at things from a perspective of asking how we solve these problems for people who are kind of at the back end of whatever issues are happening in the state.”

And Ducey’s large income tax cut that will take effect next year likely makes funding for some of Hobbs’ priorities difficult.

“We’re going to have to be creative and I think you will find that social workers are really good at being creative and finding solutions and ways of solving problems that other folks don’t always think of.”

Hobbs is a pragmatist and intends to build a cabinet with both Democrats and Republicans but her philosophy is still centered around interagency collaboration, coordination and looking at the structures to see what will work for the state and for the people who are the ultimate recipients of these services and funds, according to Bones.

In a Dec. 15 interview to Jewish Insider, Hobbs said the rise of antisemitism in the state and country concerns her and cited possible strategies such as “strengthening hate crimes legislation, providing security funds to places of worship and working closely with law enforcement officials to thwart potential attacks.”

It’s not something Bones and Hobbs have discussed yet, however, as they’re still “trying to get to the bottom of all the things that are gonna slam us in the face on day one,” Bones said.

Antisemitism is “a huge issue” for Bones and something she’s concerned about, both because of her online presence, and the fact that she’s a Jewish woman.

Bones is not a Jewish surname (her maiden name is Gorelick) but people wouldn’t have to dig too far to discover her Jewishness. Her office has installed safeguards around her and her family’s social media accounts so that they don’t become targets of antisemites. She’s also asked her 17-year-old son, who is “understandably riled up about antisemitism,” to tone down his social media posts.

In terms of issues that Jewish Arizonans might have a special interest in, including maintaining a good relationship with Israel, Bones said the administration will maintain the status quo.

Of course, a lot can change over the course of an administration and priorities shift. Right now, Bones chooses to focus on the good work she will be a big part of.

“When I started my career it never came to my mind that this would be a job that I would have the opportunity to do. It’s humbling and exciting and to have Gov.-elect’s trust means the world to me. It’s something I take very seriously.” JN