What to Expect When Expecting (and Running)

Running for office while pregnant or parenting can still be a major challenge. I speak from my own experience. 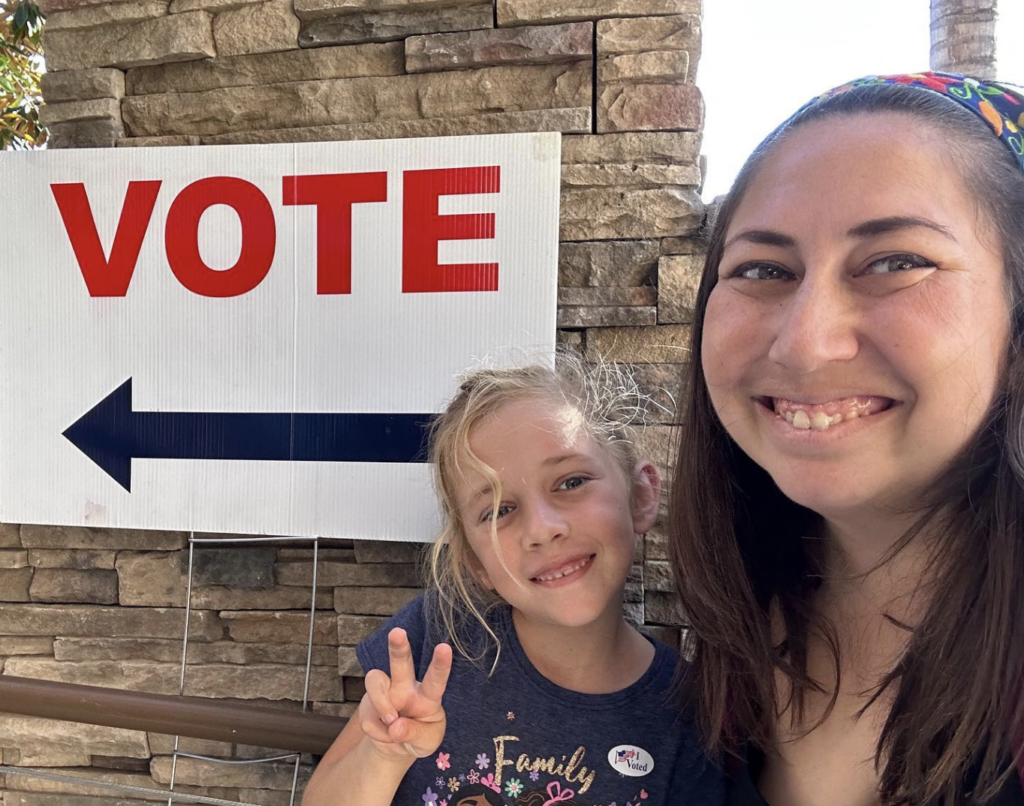 Christine Hernandez and her daughter during early voting in the 2022 midterm elections. (Instagram)

For years, multiple organizations and significant investments were created to help address the political gender gap. While the number of women running for political office has gradually increased over time, it’s not happening fast enough. The reality is, running for office while pregnant or parenting can still be a major challenge.

Every other election cycle, there is a spotlight in the news of an individual woman running while pregnant. Presented as an anomaly, the candidate’s story is shown as one of a struggle to balance the demands of running for office with the demands of pregnancy. The primary focus tends to be on large statewide and federal races. In May of this year, the spotlight was on Erin Maye Quade, who gave her convention speech while actively in labor and eventually had to suspend her campaign in order to give birth. She went on to win her state’s primary election and is now the state senator-elect for Minnesota’s 65th district.

In 2022, we need to pay closer attention to the painful realities of women running for office while pregnant. We need to actively combat the political gender gap among people running for office—and a major part of that is acknowledging the need for greater support of pregnant and/or parenting candidates.

I speak from my own experience. On June 12 of this year, I graduated from a statewide six-month candidate training program called Emerge California. Having previously run for office in 2020, I felt prepared for what this cycle would look like for my large local school board race. I launched my 2022 campaign, began fundraising, and I outlined my field plan. I knew what it would take to balance a full-time job and parenting responsibilities because I had tried it in 2020.

To my shock, five days after the program graduation, I discovered I was pregnant. Before I could even process the information, the Dobbs decision was announced. As it turns out, not only was I going to run for office while trying to navigate a pregnancy—I was going to do it during a time where reproductive rights were under greater scrutiny.

The thought of suspending my campaign crossed my mind. I knew how hard it was going to be for my family and me. At the end of the day, the reason I ran for public office hadn’t changed or become less significant to me, so I decided to stand up for what I believe in.

For the first few months of my pregnancy, I was able to campaign as planned, while keeping my medical status private. Having previously experienced a high-risk pregnancy, I needed privacy to make my medical decisions based on what was going to work best for me. The added stress of additional appointments for a high risk pregnancy meant I had less time for rest and was constantly trying to balance work, parenting and my volunteer commitments. I wasn’t sharing the pregnancy publicly until I had a better sense of my own health, so I was constantly worried that others would believe that I wasn’t taking my campaign seriously.

Six to 8 percent of all pregnancies are considered high-risk. And while every high-risk pregnancy is different, women can expect extra visits to the doctors, additional tests and a lot more stress.

In addition to genetic concerns, I feared a repeat of my first pregnancy—which led to preeclampsia and a medically necessary C-section at 32 weeks. This serious condition, which is the cause of about 15 percent of premature births, can lead to stroke or death for the mother if not treated in time. My first-born was in the NICU for weeks. The fear of it returning in this pregnancy was already on my mind before I learned that I would have the added challenge of a pregnancy with gestational diabetes this time around; yet another complication that affects 2 to 10 percent of pregnancies in the U.S.

Campaigns are not known to be kind on bodies. It takes a lot of energy to be seemingly in multiple places at once, talking to voters and motivating people to support you. The learning curve to protect my body and my baby was steep and had to happen quickly after the gestational diabetes diagnosis.

In the first couple of weeks after the diagnosis, I had to check my glucose levels in the middle of an endorsement interview. Luckily, the interview was via Zoom so I was able to hide when I pricked my finger to check my blood sugars. Within a few weeks, I had a routine and learned which clothes had the best pockets so that I could discreetly store my glucose meter. By October, I wasn’t shy about what I had to do in order to take care of my health. I knew which snacks to pack and what time I had to be home in order to self-inject a dose of nighttime insulin.

As the campaign and pregnancy progressed this fall, I tried to balance my own physical limits. I nearly passed out while canvassing one morning. It was devastating to realize I couldn’t physically campaign the way I had wanted to. Thankfully, my supporters picked up where I left off, knocking on doors with my campaign literature. Even still, I felt like I couldn’t be my authentic self because of my status as a pregnant candidate. Would talking about the challenges make voters think that I wasn’t really in this race?

This thought became ever more present as my pregnancy progressed. I often had to decide whether I was feeling well enough to attend a local community event or if I’d need to stay home to take care of myself. Sometimes I pushed through it—but when I couldn’t, I wondered what message that sent to others. Only my family knows that on the night of a large banquet fundraiser, just 10 days before Election Day, I was sent to the labor and delivery wing of the hospital. Luckily, I was able to come home after a few hours, but it’s a story I don’t often tell.

The outpouring of support from communities focused on helping women—especially those pregnant and/or parenting while running for office—has kept me going through these difficult months. I sought advice from another pregnant candidate. It was comforting to be able to speak to someone who was living through a similar experience, I was reminded that I wasn’t alone. When I felt exhausted from the realities of campaigning while pregnant and parenting, there were others who cheered me on from organizations like Vote Mama.

Despite years of training other women to run for office, I was painfully reminded in 2022 of how much more needs to be done in order to help women cross the finish line. The political gender parity that is needed in our country, will only exist if we implement systemic changes to support systems, focus on community building, and begin destigmatizing reproductive and maternal health.