The Virginia State Delegate and author of Burn the Page takes our literary survey. 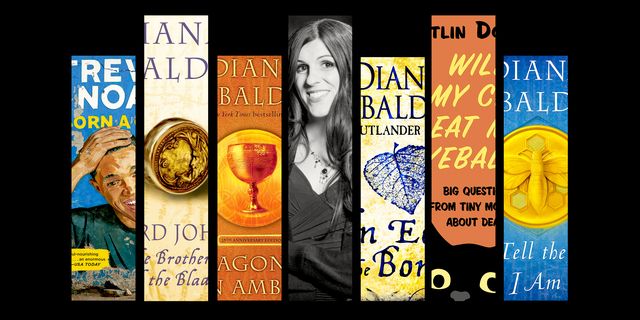 Before she defeated her bathroom-bill-proposing, “chief homophobe” opponent for a seat in the Virginia House of Delegates in 2017—the first openly transgender person to be elected and seated in any U.S. state legislature—Danica Roem was a local reporter for a decade. She once again shows the might of her pen in “memoir-turned-manifesto” Burn the Page (Viking).

Re-elected in 2019 and 2021, Delegate Roem has helped expand Medicaid for nearly 650,000 Virginians, increase teachers’ salaries, cancel school lunch debt (including personal donations), and ban the gay/trans panic defense, a legal strategy that blames a defendant’s violence on the gender identity or sexual orientation of a victim. She recently became executive director of Emerge Virginia, which recruits and trains Democratic women to run for office (including Roem herself.)

The one-time lead vocalist for thrash metal band Cab Ride Home; was the subject of the campaign trail documentary This is How We Win; has cats named Melinda and Bela; used to write for a yoga nonprofit, work as a delivery driver for an Afghan Kabob House, and run a mobile yoga-to-metal-music studio; has an ERA tattoo; went to the AMAs with Demi Lovato; got her first cassette tape, The Who’s Quadrophenia, at age 5; and is a fan of Swedish melodic death metal (all time-favorite band: Dark Tranquillity , plus loves At the Gates, Soilwork, and Arch Enemy.)

…made me weep uncontrollably:

Dragonfly in Amber by Diana Gabaldon. When Jamie Fraser says goodbye to his pregnant wife, Claire, before she goes back through the stones at Craigh na Dun made me sob out loud:

“‘I will find you,’ he whispered in my ear. ‘I promise. If I must endure two hundred years of purgatory, two hundred years without you – then that is my punishment, which I have earned for my crimes. For I have lied, and killed, and stolen; betrayed and broken trust. But there is one thing that shall lie in the balance. When I shall stand before God, I shall have one thing to say, to weigh against the rest.’

“His voice dropped, nearly to a whisper, and his arms tightened around me.

…I recommend over and over again:

Born a Crime by Trevor Noah. It has nothing to do with The Daily Show or even his stand-up career. It’s about growing up as a biracial kid in apartheid South Africa and the years that followed. It’s an incredible read with a perspective of a life I could never imagine.

…made me rethink a long-held belief

The Science of Yoga by William J. Broad breaks down both the truths and myths of what different asanas and practices do and don’t do for the body. For example, your body doesn’t sweat out toxins; it sweats out water. (No kidding, right?) That said, the health benefits of a consistent practice are real, so much so you actually read about a doctor who prescribes specific asanas (postures/poses) for specific ailments faced by his patients.

…I swear I’ll finish one day:

Light on Yoga by the late B.K.S. Iyengar. I’ve had it for eight years and, at some point, will actually complete it once I get into the headspace to just recommit and welcome yoga back into my day-to-day life like it was so much in 2014.

…I read in one sitting, it was that good:

Heavy Tales: The Metal. The Music. The Madness. It’s the autobiography of Megaforce Records founder Jon Zazula, as told to one of my fellow Virginians, Harold Claros-Maldonado. If you’re an old-school metal nerd like yours truly, then you’ll just get such a kick out of this book as Jonny Z talks about everything from breaking Metallica on the East Coast to how the American thrash scene came to be with stories about Anthrax, Slayer, Testament and so many others.

The Scottish Prisoner by Diana Gabaldon specifically and the Lord John series broadly. Of the companion novellas and short stories away from the nine main Outlander novels, you easily have enough material for four or five seasons following Lord John through the many battlefields and bedrooms that make up his absurdly fascinating (fictional) life.

Go Tell the Bees That I Have Gone by Diana Gabaldon, the ninth main novel in the Outlander series, signed by herself!

…has the best title:

Will My Cat Eat My Eyeballs? by Caitlin Doughty, America’s favorite (and funniest) mortician.

…has the best opening line:

The intro to Voyager by Diana Gabaldon won EW’s “Best Opening Line” award, and it always make me smirk: “He was dead. However, his nose throbbed painfully, which he thought odd in the circumstances.”

…has a sex scene that will make you blush:

One straight, one gay and one bi, all from the Outlander series:

Straight: In Voyager, Jamie describing to Claire in extensive detail exactly what he planned to live out his fantasies with her when they get back on land is somehow even better than describing an actual sex scene.

Gay: Lord John finally hooking up with Captain Stephan van Namtzen in The Scottish Prisoner is… ::ahem::… ohh my.

Bi: In Written in My Own Heart’s Blood, my jaw dropped and I yelled out, “No!” when Jamie Fraser’s gay best friend Lord John explains why he had sex with Claire when they were both grieving what they thought was the death of Jamie: “We were both fucking you!” Fist, meet face.

Lord John is one of my all-time favorite characters and, simultaneously, for all of his wittiness and charm, he absolutely cannot keep his shit together around his unrequi or ted love, Jamie.

So before I got super into the Outlander books as a coping mechanism during lockdown in 2020, I rarely ever read fiction books. However, a friend recommended Death by the Riverside by J.M. Redmann to me and it is such a trip: part mystery, part thriller, a lot of sarcasm and cussing from our dear lesbian protagonist private detective in Cajun country. It definitely opened novels back up to me for the first time since I was a kid.

…I asked for one Christmas as a kid:

The Chickens are Restless by Gary Larson. I mean, whether you’re a kid, teen or adult, you just have to love The Far Side.