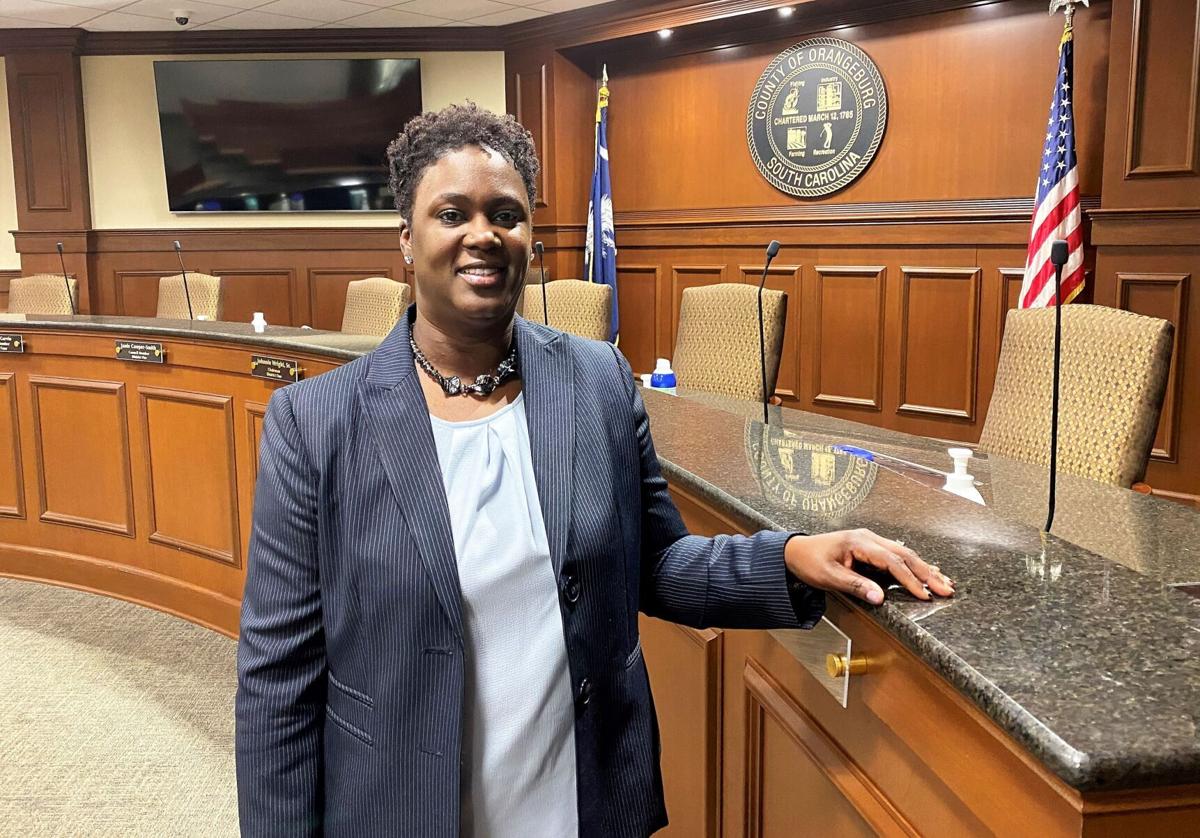 Orangeburg resident Latisha Walker will be sworn in Jan. 3 to fill the seat left vacant by the death of Councilman Willie B. Owens, who served for 15 years.

“I am very excited,” Walker said about the opportunity to serve the residents of District 7 and the county. “It is something different, very different for me, but considering I have been a public servant most of my adult life, I think that it will work hand in hand.”

“I have a lot of support,” Walker continued. “I have a lot of family, friends who stand beside me and who also stand there to be that shoulder and to also offer advice.”

Walker, who did not have a challenger in the Democratic primary or the general election, said residents have expressed a number of concerns they’d like addressed.

For instance, they’d like to see more industry brought into the county and partnering with the school district in a collaborative approach to improve test scores.

Walker said improving education is key to ensuring “industry workers and developers will be comfortable bringing their children into Orangeburg County.”

“We have to do a better job in supporting each other, especially our children for their future,” Walker said on her website. “That is why I pledge to work with the Orangeburg County School Board to collaboratively address issues facing our school district so we can attract new business and retain talent in Orangeburg County.”

Other goals for Walker include:

• Creating jobs: “I will work collaboratively with the different levels of government and our local businesses to make our economy more resilient and to retain the brilliant students educated at two of the nation’s most prominent HBCUs and one of the most state-of-the-art technical colleges,” Walker said. “There is no reason they should feel the need to leave the area to find employment in surrounding counties and states.”

Walker also said she will be pro-business to ensure students can stay in the county and work.

Walker cites her experience as a board member with the Lower Savannah Council of Government’s Workforce Development Committee as being an asset.

• Extending infrastructure, including wastewater service and broadband: “Orangeburg has been getting more resources to address issues as it relates to the water and sewer system,” Walker said. “I will be a leader to make sure that we approach and implement projects to ensure that communities are not restricted to the use of wells.”
She also wants to expand the availability of high-speed internet service.
“With better infrastructure and internet services, we can expand Orangeburg and welcome new businesses, which in turn brings more jobs to the district,” she said.

• Reducing crime through the establishment of community policing and building community partnerships: “We deserve to feel safe at home,” Walker said. “One of the most difficult things that I’ve ever had to do was a death notification, notifying a parent that their child had been murdered.”

Walker noted she has spent her entire career working to make Orangeburg safer and has investigated and prosecuted violent crimes and crimes against children, the elderly, vulnerable adults and businesses.

• Increasing the availability of affordable housing through the creation of public and private partnerships that will enable college graduates to live in Orangeburg after graduation: “We need to ensure that people are able to pay their monthly rent while being able to afford to live their lives and enjoy their lives,” Walker said.

“We need to ensure we are assisting people with resources for affordable housing and we open doors for them to have a path to affordable housing. No person should be paying more than 30% of their income towards rent or housing,” she said.

Walker was born and raised in New York and relocated to South Carolina while in high school, graduating from Blackville-Hilda High School.

She’s a 2009 graduate of Claflin University with a bachelor’s degree in sociology.

Walker, a retired law enforcement officer, began her career in 1998 with the Allendale Police Department as a patrol officer.

In 1999, Walker began working with the Orangeburg County Sheriff’s Office where she was a deputy in the patrol division until being promoted to the investigative division where she made history as the first African American woman promoted to the rank of investigator with the sheriff’s office.

While in the investigative division, Walker worked violent crimes. She also specialized as the department’s only certified forensic interviewer trained to conduct interviews of child victims of abuse and sexual assault.

Walker then transferred to the narcotics division and worked narcotics cases in Orangeburg County and partnering agencies.

In 2005, Walker began working with the Orangeburg Department of Public Safety, where she gained additional training as a nationally certified firefighter.

At ODPS, Walker worked in the patrol division as a patrol supervisor and served as the agency’s victim’s advocate, hostage negotiator, director of juvenile services and an instructor.

Walker also taught courses and conducted workshops for law enforcement, state agencies, the public and businesses throughout the state of South Carolina.

During her tenure with ODPS, Walker implemented the first-ever mentoring program and dance company “Positive Youth in Motion.”

In 2015, Walker began working with the South Carolina Law Enforcement Division, where she served as an agent in the Alcohol Enforcement and Vice Services Division.

While at SLED, Walker was also a senior field training agent who trained new agents and conducted trainings for the agency.

She also made history at the agency, becoming the first African American woman to be promoted to lieutenant in the Alcohol Enforcement and Vice Services Unit. She also supervised the agency’s first-ever human trafficking unit.

“My father was my hero, biggest supporter and role model,” Walker said. “I mirrored my career path after him as he was a retired homicide detective with the New York City Police Department.”

“He recently passed away on Oct. 30, two days before my birthday,” Walker said. “I think that my daddy was more excited about the election than I was. He cheered me on during the good times and was there to wipe my tears during the bad.

“I’m so grateful that God blessed me with him for as long as he did.”

Walker is a 2021 Emerge graduate and is currently the district director for the South Carolina Democratic Women’s Council in the 6th Congressional District. Emerge is an organization that recruits and trains Democratic women to run for office.

Walker is the founder and chief executive officer of the Tiffany Grant Foundation, a non-profit organization that serves youth and under-resourced communities.

Through the foundation, Walker conducts youth workshops, provides food and hygiene items to families in need, and provides emergency aid to high school and college students.

The foundation has also implemented “Project Warm Streets” a program established to serve the homeless in Orangeburg County.

She has also been involved with the Orangeburg Morning Rotary and a board member of the Lower Savannah Council of Governments’ Youth Workforce Committee.

Walker is also a Silver Life Member of the NAACP.

In her spare time, Walker enjoys spending time with my family and researching new things.

Walker is married to Robert and they have four daughters.

Her husband has been in law enforcement for 31 years and is currently a lieutenant in the ODPS patrol division.

Walker has a daughter who recently returned home from a deployment in Kuwait with the United States Air Force.

She also has a daughter who is a freshman at Claflin University, and another who is a senior at Orangeburg-Wilkinson High School.