Students who received Funded Internship grants from Bowdoin’s Career Exploration and Development (CXD) spoke about their experiences at a recent poster exhibit.

The Funded Internship Program awards students $5,000 grants to pursue internships that would otherwise be unpaid.

The setup of the poster fair encouraged attendees to wander through the Union, chatting with students about what they did this summer, what they learned, and how their experiences shaped their thoughts about future career choices. 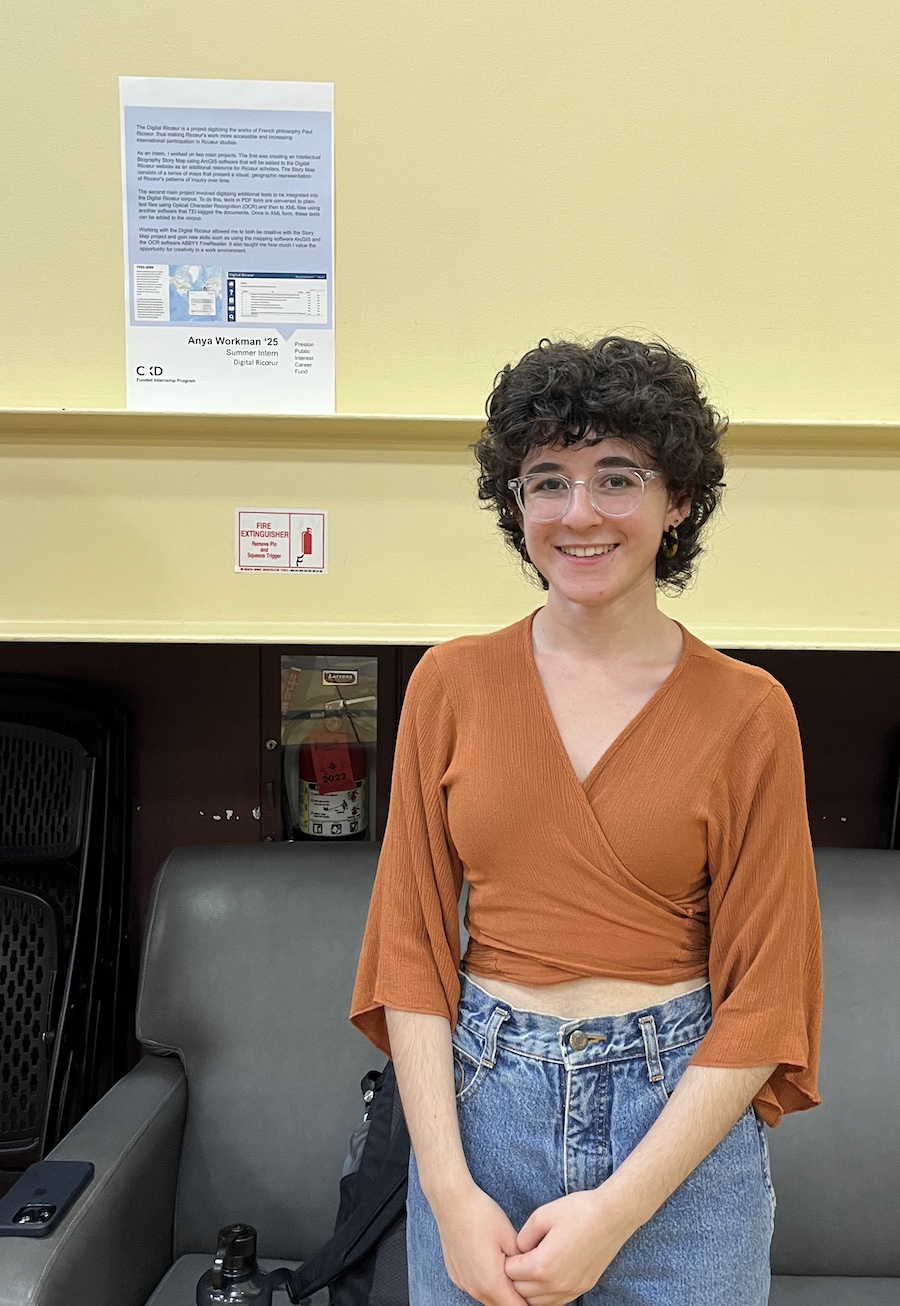 Workman was an intern for Digital Ricœur, which is digitizing the works of French philosopher Paul Ricœur to make his works more accessible. She worked on two main projects: physically digitizing his works and  working on an “Intellectual Biography Story Map,” a visual geographic representation of Ricœur’s patterns of inquiry throughout his career.

How do you think Bowdoin Funded Internships shape the wider Bowdoin community and the work Bowdoin does generally?

“At least for me, I knew that I wanted to work this summer. Having the ability to do an internship that wasn’t funded, that I wasn’t going to be paid for, and realizing that through this program I could actually make money by doing this work was eye-opening for me. It opened a lot of doors. How it shapes the wider Bowdoin community—it allows people to follow their interests without the constraint of, “Oh, I need to get paid this summer, so I can only work at a cafe or something. But instead, I can pursue all these diverse interests that I have.”

What’s a fun fact that you learned from your internship?

“I had never heard of Ricœur and I haven’t done much philosophy work. I wasn’t looking at the contents of Ricœur’s philosophy; it was more about studying him as an intellectual. It was a unique way of looking at a scholar. So I learned that when he was working as an administrator at a university in France during a tumultuous time, a student emptied a trash can over his head. That was really awful! But later, years later, the student actually went back to Ricœur and apologized for that. I just thought, “That’s not something that happens to everybody—both for the student to do that and then to later apologize!” 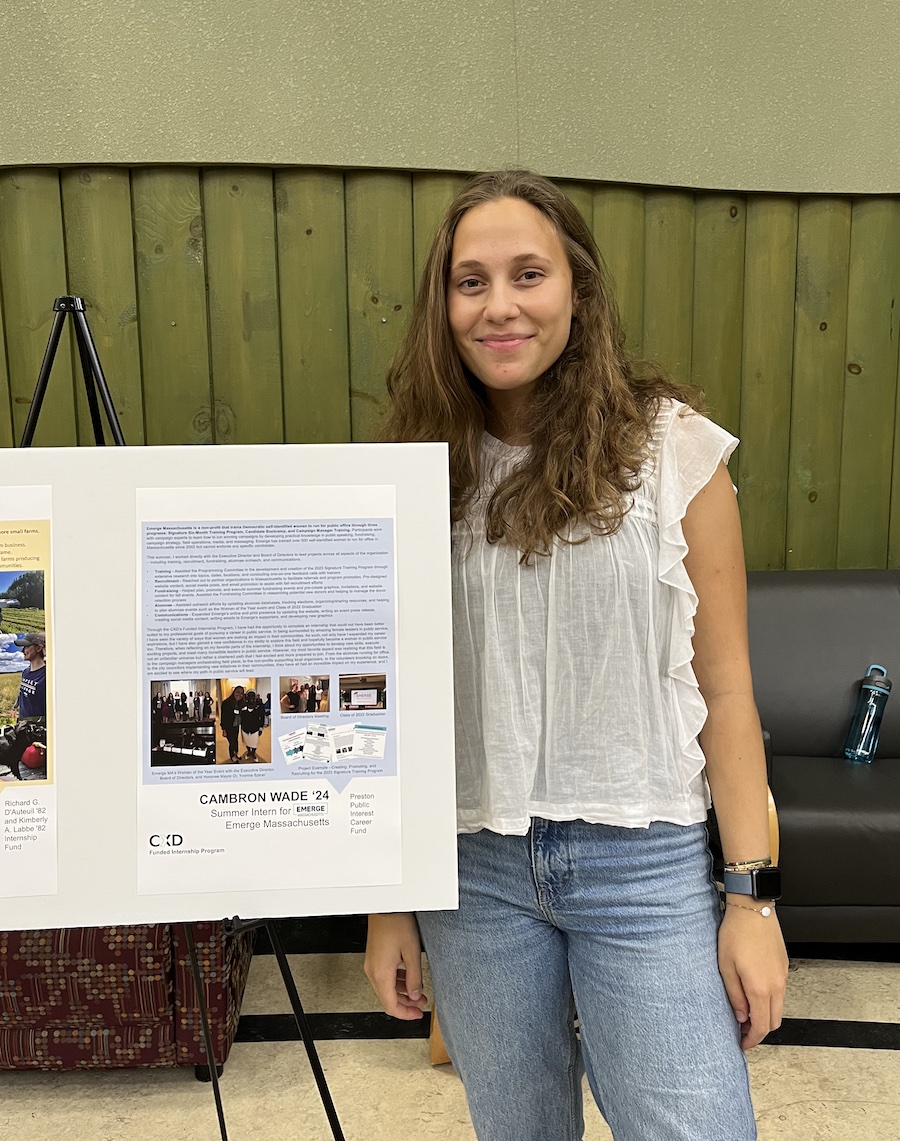 Wade worked for Emerge Massachusetts, a nonprofit that trains self-identifying women in Massachusetts to run for public office through three different programs. Working directly with the executive director and board of directors, she helped with all aspects of the organization, including training, recruitment, fundraising, and communications.

“I was interested in learning more about the campaign world and how campaigns work, function, and operate. My hope was absolutely fulfilled. I have a better understanding of how campaigns work and, more specifically, how women can be supported in the process. The internship was exactly what I was looking for and I couldn’t have found one that was more suited to my interests. Spending the summer surrounded by amazing, powerful, strong women in public service was an incredible experience and I’m grateful for Emerge and CXD summer funding.

What advice would you give to another student who was interested in an internship focused on similar work?

“For a sophomore who’s looking to get into public service this summer, the Sophomore Bootcamp was important to me. It helped me get my footing, meet people who I wanted to connect with, get connected with the CXD office, and get connected with CXD peer advisors. Bowdoin has so many amazing resources and if you just dive into them, it’s way easier than you think it is in the beginning. So taking advantage of the resources is my advice.” 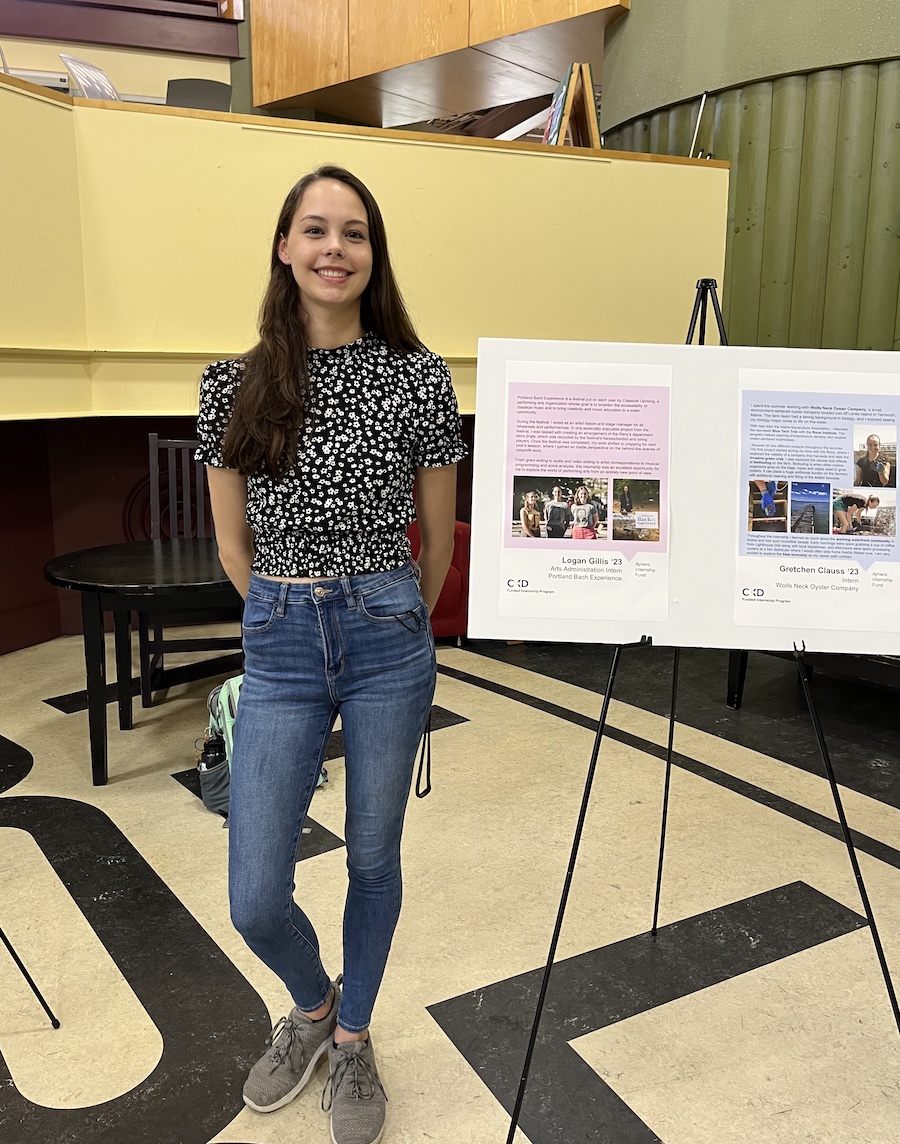 Gillis worked with Portland Bach Experience, a Portland-based performing-arts organization. As an intern, she participated in the entire process of putting on a music festival. This included setting up chairs for audience members, selling tickets, producing marketing materials, editing videos after the performances, and creating posts for social media. She also worked directly with many musical artists.

Did your internship experience inspire any further interests or possible future work?

“What was great about this internship was that it showed me that what I value about music is being part of the experience of creating music. So I did learn that the weeds are not so interesting to me. But I gained a strong appreciation for the people who dedicate themselves to putting in that work so that other people can experience music. In that way, I’m very thankful for the experience.”

What was your favorite memory of your internship?

“That’s a fun one. Reny’s department store, an old Maine business, has a jingle they put in all their commercials. For the festival, I got to create a musical arrangement for the harpsichord and strings of Reny’s jingle for them to record and play in one of their commercials. So we’ll see if it’s ever out there!” 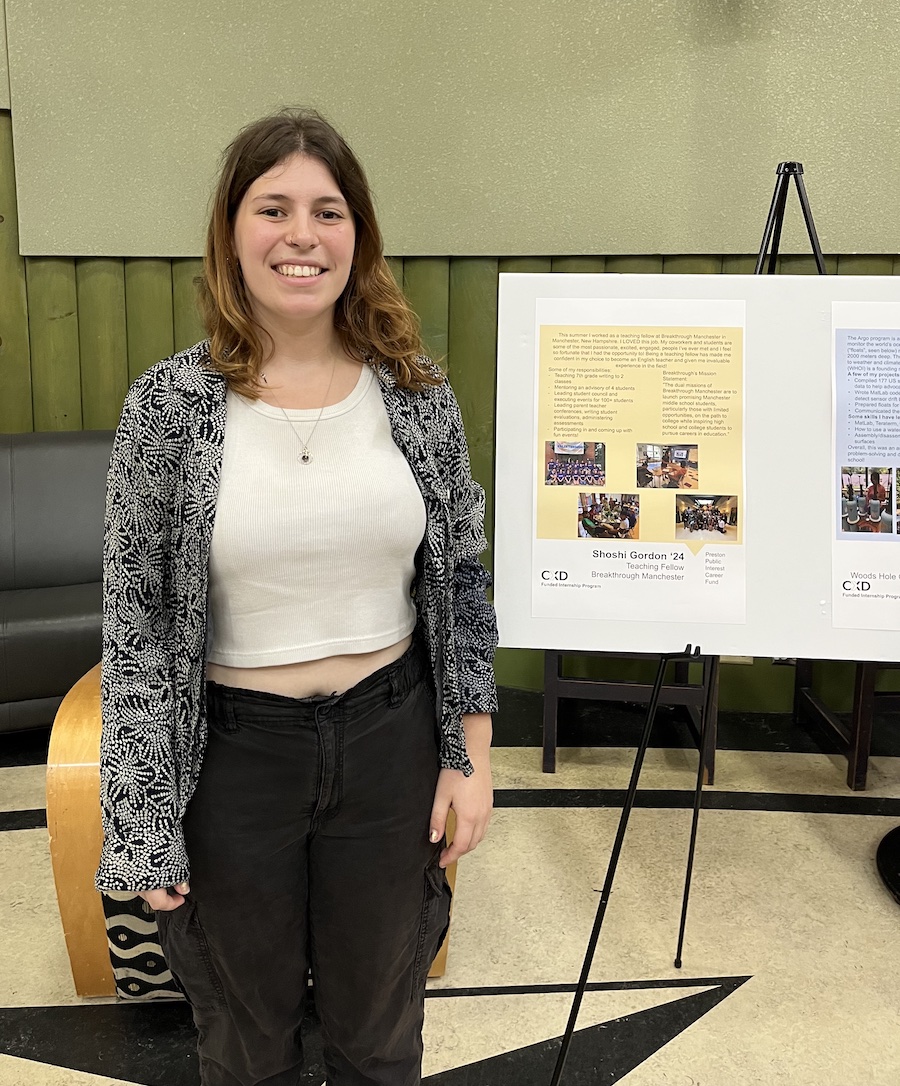 Gordon was a teaching fellow at Breakthrough Manchester, a New Hampshire-based program with a dual mission to inspire and train college and high school students to be teachers. It also works with primarily first-generation, low-income, high-achieving middle school students on the path to college. At her location, Gordon taught seventh-grade writing. Breakthrough Manchester gives fellows a curriculum, but because this was her second year participating, she was able to expand and change it. In the classroom, she and her students created ‘zines (miniature magazines) and wrote essays. Outside the classroom, she ran an extracurricular yearbook committee and a student council committee. In addition to gaining teaching experience, she also ran parent-teacher conferences.

What advice would you give to a student who was also interested in education but was unsure of where to start?

“The best path is to talk to Meg Springer or someone at CXD. People at Bowdoin—your professors, a teacher advisor—really care about you. And then just apply to programs. I applied to the Funded Internship program and thought, “This can’t be, this is too good to be true!” and I’m so happy that I did. In high school, it can be scary to take your shot and talk to your professors, but as you get older, you realize you might as well just do it. And you’ll figure it out from there.

These internships aren’t only about work, they’re also about the people you collaborate with. What new bonds did you make or existing relationships did you strengthen?

“I’ve met some of my best friends from the program. I worked there last year and have friends I still talk to. It’s wonderful because you get a range of ages and experiences. This summer, we had people from the ages of seventeen to twenty-three working. People who spend their summer wanting to teach and work with kids are some of the kindest, most passionate, and patient people, and it’s amazing to get to be in a space where you’re all so excited and have the energy to innovate.” 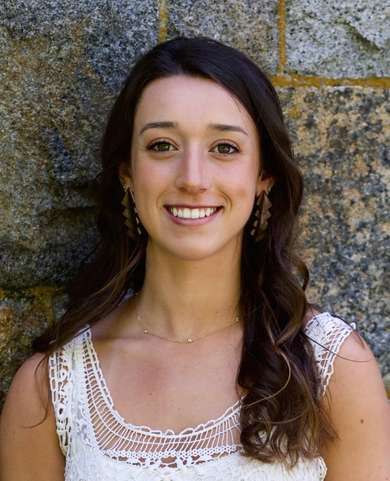 Keohan went to Peru for a water and sanitation internship. The organization Omprakash connected her with a nonprofit called EcoSwell located on the northern coast in Lobitos, a small seaside town. Lobitos is a water-insecure community with no natural rainwater, so her work was to try and find new ways to clean and purify water so it could be reused in the ecosystem.

Did your internship experience change your perspective or approach to Environmental Studies or anthropology?

“I thought I was going to enter the nonprofit world, but after seeing how hard it is to get funds to make the changes you want to see and how to enact policies….You need to have relationships with government. Being part of a nonprofit might not be as fulfilling for me as changing those policies and helping larger corporations make good decisions through consulting. Although I still have a strong interest in environmental studies and anthropology, how I will try to engage with those fields has changed after being in an impoverished community doing nonprofit work.”

What did you learn that you only could have known after your internship?

“One thing that I knew was a possibility but didn’t think that I would be practicing in my own life was dry-toilet technology! It’s an outhouse with a chamber that gets changed every six months. Through a biological process and the right type of bacterial organisms, the waste that was accumulated over the past six months turns into great manure. Since there’s no good soil for growing, communities have to use fecal matter and compost as the only types of manure to have soil stabilization. I learned a lot about waste systems and sanitary practices—and I don’t think I would’ve learned that otherwise.” 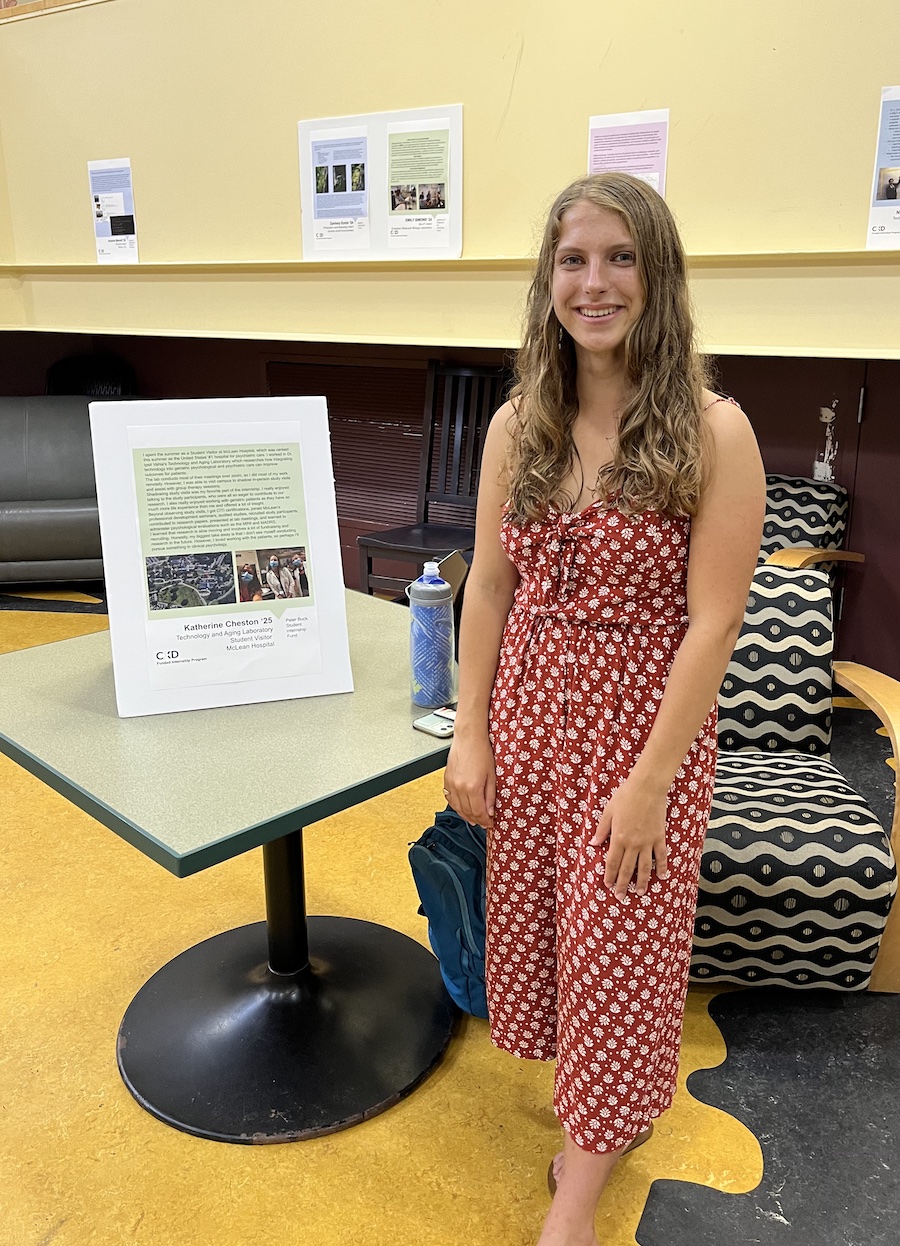 Cheston was a student visitor at McLean Hospital and tech for Dr. Ipsit Vahia’s technology and aging research lab focused on geriatrics, psychology, and psychiatry. She’d never conducted research before and enjoyed shadowing the study visits and learning how to audit all the certifications for human subjects research.

What were the most rewarding and challenging aspects of your internship?

“I loved anything study-participant facing. It was wonderful to work with older people—I hadn’t gotten to do that before. I’ve worked with kids a lot and some of the people skills were transferrable. I enjoy getting to know people and, at the same time, that can be hard when we did psychological evaluations. People would be talking about difficult experiences they’ve had in the past with mental illness or recurrent suicidal ideation. And part of research is you’re just collecting data, you’re not there to support them. So it was hard when someone was saying they were experiencing suicidal thoughts just to record their response and move on to the next question. That was probably the most challenging part of the job.

If you could do your internship all again, what might you do differently or do as further work?

“I don’t think I’ll do research again. I’m interested in psychology but I found the impersonal part of it difficult. But I’d be open to going into clinical psychology and doing an internship or job that’s at an in-patient unit running group-therapy sessions.”